I'm going to copy/paste a couple emails, then update on today.

But first, the back story that I thought was covered in the email that doesn't exist.

On Saturday, Mike texted me around 11-something to say that he had found a cat with a broken leg that was just bones. Would drink water, but he had no food to offer except Patch's kibble, which of course he didn't eat. We went back and forth for a bit and I was a little annoyed with him because I wasn't sure why he texted me if he didn't intend to help. Did he just want me to feel terrible? He figured the kitty would need to be put down or would need tons of money in vet tests and such. But I, of course, as usual, was not willing to just write it off that easily, especially without even seeing him. So Mike was going to finish his walk with the dog and then I'd meet him at his house and we'd go look for the cat. Much easier to do without the dog with us and with a kitty carrier.

On his way home, he texted me that he found a tiny kitten stuck in a window well of an office building. Again, had to wait until he got the dog home to do anything about it. So I met him at his house, and we went to get the kitten first. He was just planning to take it out and let it go. But I was like what?? This is just a baby! She's only about 7 weeks old and the building is on a super busy street. What a terrible idea! So we took the kitten with us and went looking for the cat.

He had moved from where Mike had seen him last. Dragged himself from the front yard to the back yard (I believe he was looking for water) next to an overturned, dented in kiddy pool with just a couple puddles of water in the dents. He was the most pitiful sight I think I've ever seen. Truly looked and felt like just fur and bones. And dragging the one foot, so it was all scraped on the top. I felt so so bad for him. I really believed I'd be taking him to the vet the next day to be euthanized. My vet has Sunday hours, fortunately, so I didn't have to wait too long to get him in. In the meantime, I decided to take him home and at least try to make him as comfortable as possible. So I sectioned off a part of the garage with assorted boxes. I figured in his state, he wasn't likely to try to escape even such a low barrier. And Pat brought me a low cardboard box with some litter in it. Some sort of recycled newspaper kind.

I gave him gooshy food and water and he ate and drank and ate and drank and ate and drank. He got up to use the litter box on his own but couldn't always get back out again so I'd come out to find him just laying in it. This was when I decided that I really like that litter. It doesn't stick to him. And it didn't get into his foot scrapes. I put down lots of fleece scraps and cardboard so he was pretty much always on something fairly soft. By the time I took him to the vet the next morning, his foot scrapes had already started to heal.

And that takes about to the email I sent yesterday:

Yesterday morning, first thing, I called Dr. Winter (yay for her having Sunday office hours!) and asked her if she could see the kitties. Little girl has her infected eye, and the old broken kitty is, of course, old and broken.

So I got the kitten out to the car first. I put her in a big shoe box with a lid (there are holes for air!) because I needed the carrier for the big kitty. Then I opened the back car door so I could bring the big kitty out. Then I went in the house for 2, maybe 3 minutes. Came back out and started cursing myself because the baby kitty had vanished totally. I looked all over the car probably 4 or 5 times, walked around all the neighbors' yards. Nothing. She was just gone. After about a half hour had passed, I deicded I really needed to get the big kitty to his appointment. I figured afterward I'd resume my search. I felt like such a terrible kitty mama! What a stupid thing to do!

Old broken kitty's vet visit went pretty well. The foot he had been dragging is all shattered. She was able to just smush the foot. Ugh. Poor kitty! But since I had put down a bunch of soft stuff for him to move around on, the scrapes were starting to dry up and heal. She splinted and bandaged the foot. Gave him a fe-leuk test (negative! yay!) and tested his blood sugar (levels normal, probably not diabetic - yay!) She also gave me some antibiotic ointment for the kitten's eye in the event that I found her. She wrote me a prescription for amoxicilin because it's cheaper to get it from the regular pharmacy than it would be for her to get and sell it. I was able to get it for free. A few of our local pharmacies have certain meds available for a really reduced rate or free, including amoxidrops. So he gets a ml twice a day. He's not too keen on that but isn't really able to fight me too much on it yet. He just puts up one paw to try to push my hand away. Awww. Poor kitty!

So then I came home and got him re-situated in his garage area. Mike came over after his walk to join me and we looked for the kitten. I also got the help of one of my neighbors and she was tromping around in people's yards with me looking around and under trees and bushes. Then Mike texted me to say he found her!

She had crawled far far up underneath the dash. I didn't even know there was an opening down by the pedals. But there is apparently. And a kitten can fit in there. So the neighbor girl contorted herself to lay on the driver side floor on her back with her arm up under the dash and cat food smeared on her finger until the kitten came close enough and she dragged her out. What a relief! I was so certain I had lost her!

She's back in the bathroom now but I'm going to get her out in a minute to snuggle her for a while. The old kitty has been getting most of the attention. He's mostly being referred to as old broken kitty but when I talk to him I call him Buddy. As in "how you doing there Buddy?" "Oh, no Buddy don't lay in the litter box!" and "Are you hungry Buddy? I have some food for you!"

He's such a sweetie and I hope I can find him someone lovely who wants to give him lots of love and a good home. But for now he's staying with me so I can do my best to nurse him back to health.

I hope his foot heals. It's pretty much either it heals, or it has to come off. So I'm hoping those bones find a way to knit themselves back together.

Yesterday he was a little stronger. He hadn't pooped since that first night/early morning. I was worried about that. He seemed uncomfortable and tried to go but nothing came out. A couple times, he had escaped his barrier and I had to carry him back to his bed. This morning, I found that the one time he escaped yesterday he must have pooped a little because I found some dry looking poop bits near the garage door. I still took him in to see the vet this morning because it was after he must have done that that he seemed to be struggling and uncomfortable.

She said he seemed to be find and she couldn't feel signs of constipation. So things may be moving slowly, but they are moving.

Also! He gained a pound already! She weighed him on Sunday and he was only 5.6 or 5.8 lbs. And with his frame, I would think he should be 11 or 12 lbs at least. But he's up to 6.8 today! And he keeps acting more like a cat. He lays more like a cat, kind of curled. Instead of like Saturday when he just lay there with all four legs out like a dead cat. And he's more alert. Still eating and drinking all the time. And today he licked himself a little! What a good cat-like thing to do!

I really hope he pulls though. What a fighter he is. 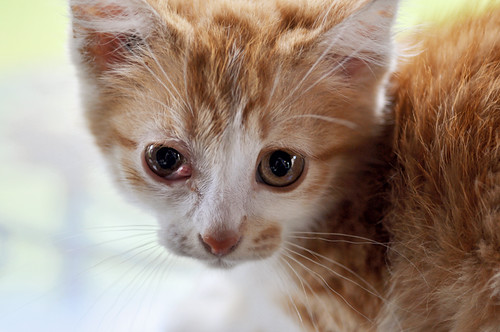 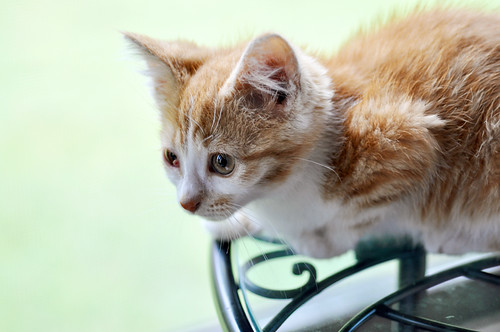 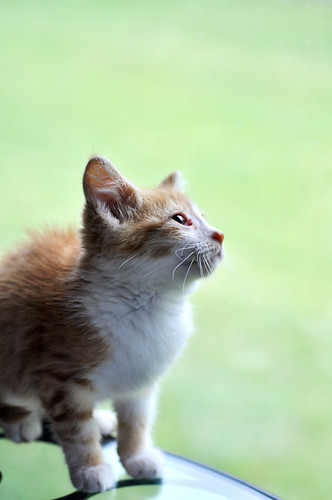 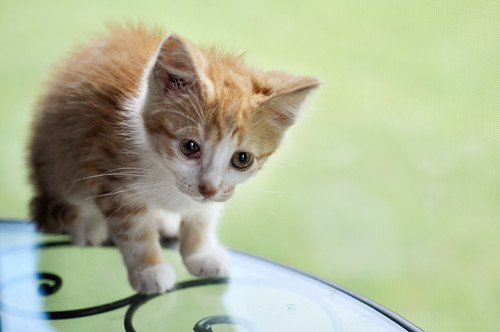 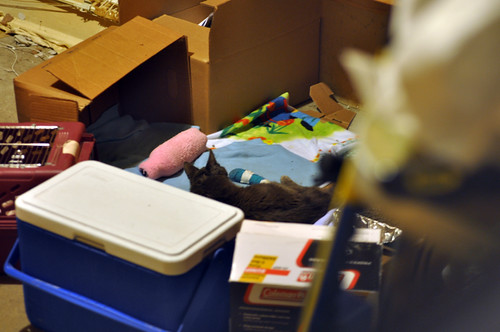 I took this from inside the house, looking out through the door. You can see how I have the little bit of garage sectioned off for him. 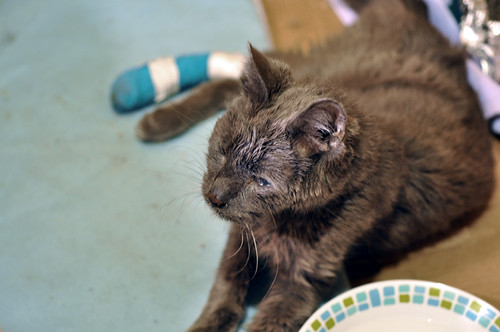 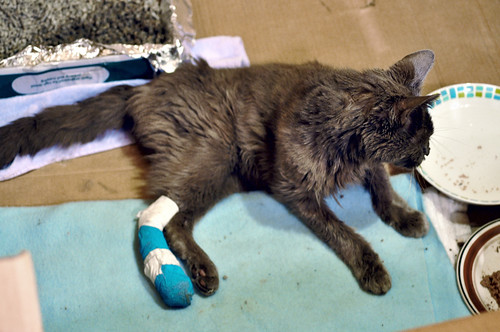 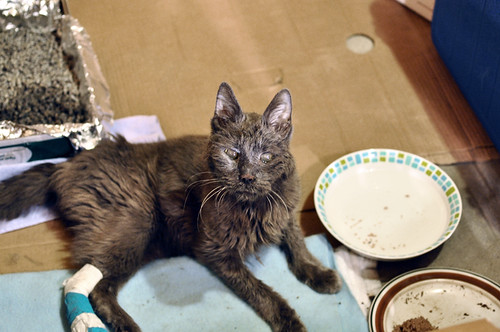 You can see the cloudiness of his eyes here. 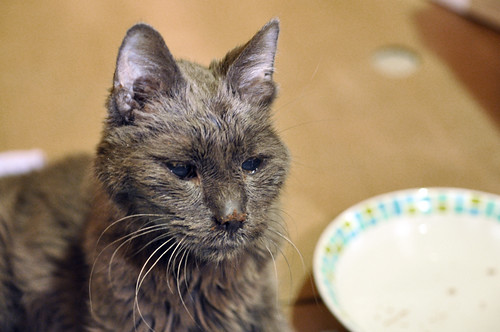 He gets gooshy food stuck to his nose when he eats. 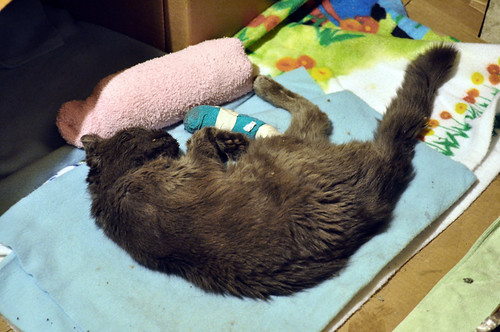 Here he is laying more like a cat for the first time. It really pleased me to see this because it was some visible progress.

These pictures don't do justice to just how horrible he looked though. Even now, he doesn't look better so much as he looks less bad. But definitely, noticeably less bad.
Collapse