Thursday Barb and I went shopping. I had her help me find something to plant my lettuce in to (hopefully) keep it safe-ish from the bunnies. So far so good on that but I know I have a long ways to go. We went to Menards but didn't have a whole lot of luck. They had plenty of containers but they're all pretty expensive. We did get an idea there though. I don't necessarily *have* to use a container designated for plants. So we went to evil Walmart and bought a big green storage container and some dirt and some other non garden things.

When we got back to the house we were able to drill holes in my plastic thing. When I say "we" I really mean Barb because she was the one to actually do that. She also set up bricks to raise it up (hopefully) to a level of safety. She put dirt in the container and I helped her put in 8 of my little lettuce plants. We put the other 4 in next to my tomato and peppers. It was then that I saw my little catnip plant! I was so excited! I tried for a couple years to get catnip to grow. I put at least 4 packets of seed in that little bed and nothing. Until now. One itty bitty plant. I'll take it though. Yay!

Yesterday I spent most of the day reading my book club book. Then it was off to g-ma's for a bit and then to Heather's for the meeting. We discussed the book, had drinks and brownies and then watched One Flew Over the Cuckoo's Nest. I had always meant to watch it. I think it was Andy's favorite movie. I don't know what to make of that so I will make nothing of it.

I left the door open all last night and Biscuit mostly behaved himself. He was only a little bit of a pain in the ass. That's good though! 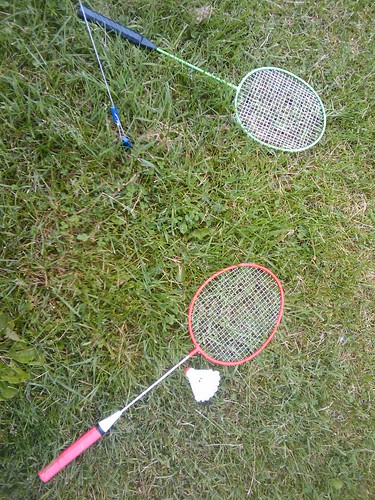