My favorite baby, the little fluffy gray one, died sometime last night. My grandma told me that last night he was a little off and was kind of falling asleep when she was holding him to feed him so she put him back to bed. He was snuggled up with the others when she went to bed but when she got up this morning, he had crawled out of the box and was laying there dead. :(

This makes me so sad! I really hoped he would do better. He was so tiny and frail and skinny... but I just hoped I could help him.

The other four are doing pretty well. They're all tentatively named. Fluff (the fluffy orange boy, he reminds me of dandilion fluff), Ham (the short haired orange tabby boy, he reminds me of a hamster), Minnie (the little tabby with orange girl who looks like a mini version of the mama, plus she's little), and Abilene, or, Abbie (I wanted to name her Stella but my grandma vetoed it right away. Apparently she really hates the name. Too bad. She would have made a fine Stella). 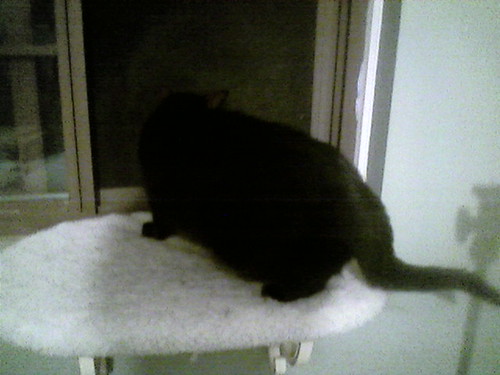 Mikale is turning 8 on Sunday. Crazy. He is getting so old! I don't like it!

We're having his party part 1 on Sunday. What we'll do will kind of depend on the weather. If it's nice, we plan to do outdoor things at g-ma's. Cook out, badminton, playing outside. If it's crummy outside, then we'll do fun things inside. Chuck E Cheese I think. Either way, he will enjoy his day and I'm looking forward to it.

Tomorrow there are two birthday parties, Steve's nephew Logan is turning 3. Holy cow! He's getting old too! My grandma also has a party to attend. An old friend of hers who she knew way back in the day. I'm thinking I will go with her. She's having trouble with her eye and I just don't think she ought to be doing too much driving. She's been having trouble. So I think I'll accompany her. But that means I won't be going to Logan's party and that bums me out. The fam's in town but it's looking like I might not see too much of them.

Today the weather was lovely. I didn't actually experience it much with work and kitty care and shopping. But what I did experience was lovely. Yay for spring!