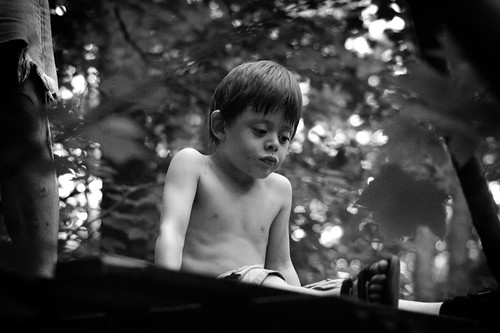 Yesterday I went with my grandma to the gas station so she could buy a couple money orders. While she was inside I put up a new air freshener in my car. I put a few new ones in my car weeks ago but they were still sitting there, in their wrappers, on my front seat. Now one is making my car smell like apples.

Our next stop was Kroger so g-ma could buy cat food and something I've already forgotten. Frozen spinach! That's it.

I bought a bunch of frozen vegetables. And for grandma, I bought a slice of lemon pudding cake and a rotisserie chicken. They have them hot and ready to eat near the check out lanes (sneaky) and she wanted to try one. They were on sale. Pretty good if you're into chicken.

I had dinner plans and spent a chunk of time editing photos for me for a change. That picture of Mikale is one of them. The rest, including a set of Handley photos, are up in my flickr.

Then it was home and to shower and to bed. Steve went to the gas station for me to gas up my car. How nice he is!