It didn't start out too badly. I woke up early because of the cats. I accomplished a few things before I went to work. It was one of those mornings that things just kept frustrating me. Little things going wrong. But little enough things that they were quickly forgotten.

Work was work. After I got out, I came home to get picnic stuff together and hauled it all to g-ma's. We fixed our lunches and went out to the picnic table under the pine trees to eat them. For dessert there were strawberries and vanilla ice cream. The day was pretty hot and I didn't feel much like doing anything. I watched some little house on the prairie, had some tea, read a little, walked around the yard taking a few pictures. I was behind the house and head mr grandma say something to CK about flies all over him and when I looked, I saw bunches of flies that were depositing bunches of eggs on him. Ugh. So I scooped him up and took him in the bathroom for a bath. I had to put him in the bath tub and washed and washed. He didn't want to be in there but he didn't even struggle much. It made me so sad to see him so weakened. He hooked his claws over the side of the bath tub a couple times but I just unhooked his claws and put them back down and he just didn't have it in him to fight me. He lay down in the bottom of the tub and meowed a little. I just felt so sad to see him like that. It was especially noticeable how bony he is when he was wet. And he just looked so pitiful. I had a hard time washing him because there is so little meat on him and I had to lather him several times. Finally I thought I had pretty much gotten them and I wrapped him up in a couple big dry towels and took him to the living room to dry him with the gentle hair dryer. When I had him on his lap he purred and purred and sometimes he would knead a little. He seemed like he would be content to stay on my lap as long as I would have him. I tried combing him a bit to help with the drying and realized that I had missed a bunch of the eggs. They were on his back legs and feet and belly/butt area. So I combed and combed and got as many as I could off little by little. It was such slow going that eventually I washed his back end a little more in the sink and that got a lot more off but not all. I took him back to the living room with more fresh towels to dry him again/more. I think I finally got him mostly dry but there were still remaining eggs. I hope they won't hatch on him.

For a long time I sat with him on my lap in towels at first until he was pretty much dry and then on blankets and drying him gently with the hair dryer. He really just wanted to be by someone. As long as I was willing to hold him on my lap he would stay there and purr and be still and quiet. When I set him and the blankets down he got up and didn't seem to be able to get comfortable. He went to use the litter box once. Ran for it with more energy than I thought he had. I offered him formula and he drank a little tiny bit but that was it. When I left, he was on the blankets but I don't know if he stayed there. I told my grandma to baby him and make his last night as comfortable as possible.

I was crying when I had him in the tub and realized that he was really doing badly. He had lost some of that pluck that had helped me decide not to have him put down the last time I had him to the vet. He has lost even more weight, which I didn't think was even possible. Today, this morning, I will make the call and get him an appointment to be euthanized. I hate that it has come to this but I don't want him to suffer and I think his quality of life has gone down. And I will not have him eaten by maggots. Those flies were like vultures. I'll bring him home to be buried. We have a spot in the back.

I cried all the drive home, tried calling Steve but he didn't answer his phone. I just felt very sad and alone and didn't have any real way of talking it out. When I got home I took a shower and put the clothes I had been wearing in my dirty clothes bin. I tried to brush all the eggs off of me when I was outside but it all needed to be washed anyway. I brought home a load of towels to do for my grandma. I put them in the washer. Steve came home after that. He had been talking to Pat outside but didn't tell me what was said. I wanted to know but didn't feel like forming the sentences it would have taken to get him to tell me so I just asked him to put the towels in the dryer for me and then into the clean trash bag I had put down there. Then I went to bed. I didn't sleep quickly or easily and the night was filled with troubling dreams I don't remember.

I don't expect good things out of today either.

CK has been sleeping. He's had no changes from last night. She said he went to the back room once but hasn't had any desire to eat that she could tell. She said he got on the back of the arm chair last night and slept. Today he's sleeping on the blankets I put on the floor for him. He only stirred once and my grandma figured Stranger was bothering him so she put him (Stranger) into kitty jail.

I called the vet. The appointment is at 3. He will probably be done by a vet tech. I will be present I'm bringing him home afterward. I expect to be burying him later this afternoon. I'll go after work and spend some time loving on him. I hope the car ride doesn't stress him out too much.

Today was hard. It sucked, but it went as well as it could have. I went to my grandma's after I got out of work, changed out of my work clothes, had a little something to eat. While I was eating, CK noticed I was there and came out to the kitchen, looked up at me and meowed a little. I gave him a bowl of formula in case he wanted to eat but he just sniffed it a little but didn't drink any. I got stuff set up next to my grandma's arm chair - water, tissues, a book in case I decided to read for a bit - and then sat CK on a blanket on my lap. I petted him and he purred and when I rubbed his front feet he'd work his paws. He rearranged himself to be snuggled even closer to me and slept. I sat there holding him and cried. I watched reruns of 7th Heaven while I held him and petted him.

At 2:30 I put him in the cat carrier, blanket and all I just set it all in and he didn't object. He didn't try to jump out. I scratched his head and rubbed under his chin and he purred. I carried him out to the car, trying to bounce him about as little as possible and he still didn't really try moving around. For the most part he just lay there and purred when I'd rub him under his chin, which I did the whole drive there. He only tried to get up once. He stood but I rubbed his head and chin and got him to settle back down. When I walked in the office a man held the door for me. He looked at CK in the carrier and seemed pleased to see him. He must have liked cats. He or the woman he was with asked what was wrong with him and I didn't tell them why he was there. I just said he was old. I started crying when I talked to the girl at the desk.

I had to take him out of the carrier separate from the blanket when I got him in the room. He wasn't coming out the same way he went in. But when I picked him up he just rested against my chest and purred, happy to be held. I set him on the blanket and did some more petting on his head and chin. He struggled a little when his arm was shaved but settled down again. The vet tech and assistant brought in the shot and I didn't get to really pet him while they did it. The assistant did though, and he knew I was there. He had been looking at me and I talked to him. I don't know if he even know it wasn't me stroking his chin. He kept on purring until the end. It was fast but looked peaceful. He only struggled a tiny bit when she put the needle in his leg. But resumed his purring while he was stroked.

She put him in a bag and then in a box and wrapped it all in a blanket. She carried him out while I carried the carrier he had come in. They will send me a bill. When the vet tech asked Suzann at the counter if I should pay then she said something like God no, and waved me through. They're nice like that. At that stupid emergency place they make you sign things and pay before they do it. Here I just had to sign a card and that was it. I cried as I drove him home. My head had hurt since this morning, worsening throughout the day. On the drive it hurt terribly and I felt like I was going to throw up. When I got to my grandma's, after I put CK's box in the shed for later burial, I took two Excedrin and lay down in my grandma's room for a while. I think I must have slept some. When I got up, more than an hour had passed. We talked about CK and how it had all gone after I got up. Then my grandma went to lay down. She got up early today to wash her hair before her eye appointment. She was tired. I brought home another load of towels to wash and dry for her. My head still hurts. 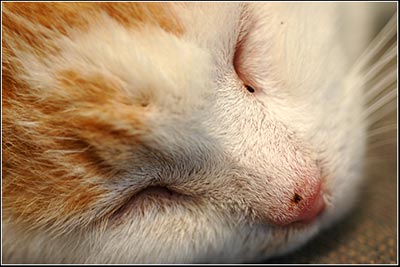 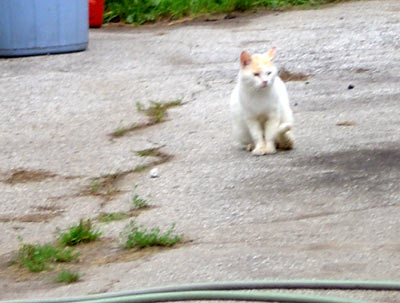 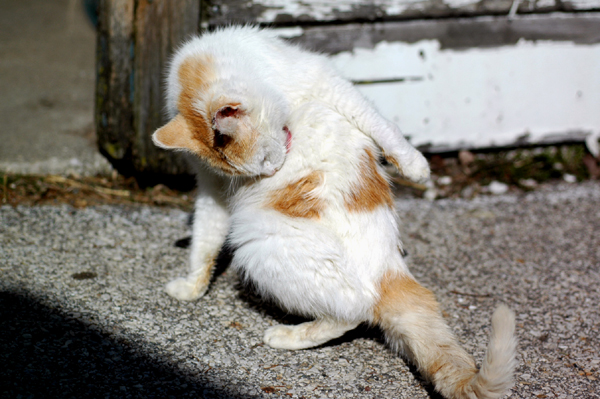