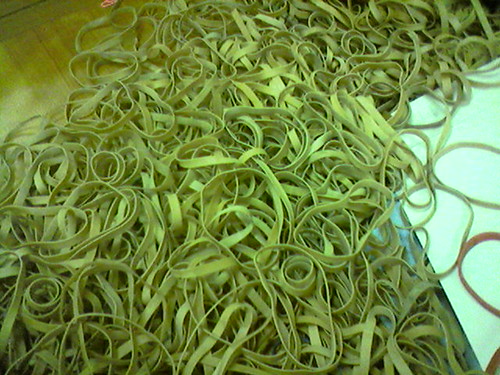 A drawer of them at work.

Strange exchange today with a Dobernala78:

When I arrived, they said they had tried to reach me on my cell phone but I did not answer. I hadn't turned my ringer back on yet. They said Dr. Winter had a flooding emergency and would be late coming back from lunch. They asked me if I wanted to wait or to see someone else. I said I'd wait. I like her. Stranger snuggled up on my lap and slept while I paged through a Cat Fancy magazine and then read a few pages of Vegan Freak. I forgot it was still in my bag. Then they called me back and showed me to a room. Suzanne took the kitty and weighed him (he gained .2 pounds! he's 1.8 now) and trimmed the tips of his nails.

Then we waited. And after a while, to my surprise, Dr. Hegenauer came in. I guess Dr. Winter must not have come back. I didn't mind that it was him. He's usually my favorite. Two out of three is alright I guess. Dr, Hegenauer thinks the kitty is doing well too. And sounded almost as pleased as I did to see his eyes working and to hear that he had looked at a fly and had been playful. He took his temperature and then took the poo that clung to the thermometer back to test for parasites. He has some so I have some packets of medicine to give him for a few days.

The Dr. drew a little graph and told me that of the three ways this kind of thing could progress, his was the best way. It can sometimes get really bad quickly and stay really bad. Sometime it can gradually get really bad and then get a little better. And sometimes it can get really bad really quickly and then get good again really quickly. And that's the best one. And that's what he has seemed to do. He did say that kitty's brain could develop scar tissues in those injured parts and that could lead to seizures down the road. But we'll just have to see how that goes.

Unless something goes wrong and he starts showing signs that his situation is moving back in the other direction, he shouldn't need to go back in for this. He can probably get shots in a couple weeks and if I want to give him a bath this weekend, that should be fine too. He has fleas so he needs it. I will probably do that tomorrow or Sunday.

Dr. Hegenauer said I can start worrying a little less now. We'll see how that works out.
Collapse