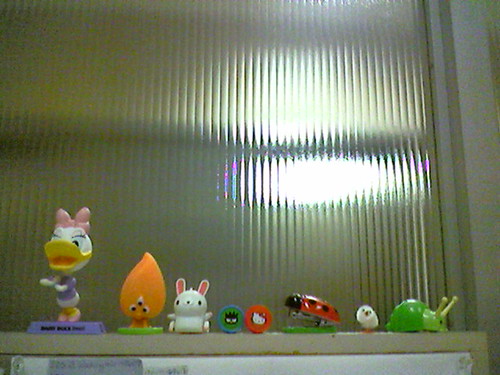 Daisy Duck on the left, originally uploaded by angelle321.

Someone left this there over the weekend. No idea who.

The babies (ha! they're huge, but whatever) are watching cat tv again. Sometimes I'm not even sure what they're looking at. But they seem very pleased.

I've had a headache all day. Through multiple doses of tylenol. And krogernol. Stupid head. I'm just sore in general today. Badminton caught up with my out of shape ass. Makes me wanna do it more!!

I made another craigslist ad today. I don't think anyone is seeing them. But whatever. Maybe I'll be lucky and someone will.

Mikale is sick today. He wanted to come here. And be sick on my couch. Not like barf on it. Like be on it while he's sick. He sounded all pitiful on the phone.

He said he wanted to see me. I said I know, it's been *days*. He said it's only been like 5 days but he just wanted to see me. (awww!)
He didn't want to go to grandma's because her cat hair makes him itch. I said I have lots of cat hair too. But I guess my cat hair is ok.
He said he doesn't have to worry about stepping on my cats. I told him he's not actually allowed to step on my cats either. And he said 'well I wouldn't do it on *purpose*!
He said my cats don't scratch. (ha but they might if he stepped on them!)

Mary reminded him that g-ma usually has treats and would likely spoil him and he said "do I *look* like I want that stuff right now?" He amuses me.

I need to shower and go to bed. Maybe a full night's sleep will make my head feel better.