Yesterday Steve and I went to g-ma's and played a lot of badminton. We don't keep score, we just play. I had a really good time with it. I might be a little sore today but really nothing much. I would definitely consider going back and playing more today but Steve might be all badmintoned out. We'll just pretend that's a word.

My hair is braided and there are lots of stray hairs poking out because I slept on it. The stray hairs are tickling my neck! Must re-braid here in a minute. Or I could actually greet the day and make myself presentable. That sounds like waaay too much effort for the moment though.

Yesterday I slept in too late I think. And too long. I was kind of draggy all day. Today I made myself get up earlier and I feel much, much better. I became a morning person. :( It's work's fault. I think at this point, it would probably stick though. I like how I feel when I'm up earlier. Though I do prefer to get enough sleep. So the weekend is good for that.

I wonder what it's supposed to do outside today. It was sunny for a minute a little after I got up but now it looks like it's all cloudy again. Not that I can see the sky from where I'm sitting. I'm just going by what the yard looks like. Muffin is watching something out there and making little mewing noises.

Accuweather says it's currently 55 and cloudy. It's supposed to get up to 75 and be partly sunny. So it looks like it will be about like yesterday probably. Which would be good. Yesterday was beautiful.

I went to Mike's for dinner. We ate outside picnic style in the yard. After yummy food I was watching ants. There was one that I watched for a long time. He was carrying a crumb. I wondered where he was going. I hoped nothing would happen to him on the way. I lost sight of him a couple times but managed to find him again each time. Still carrying the little crumb. Now I'm going to be wondering about him! If he got where he was going or not and such. If he's ok. I am silly.

Edit to add a picture: 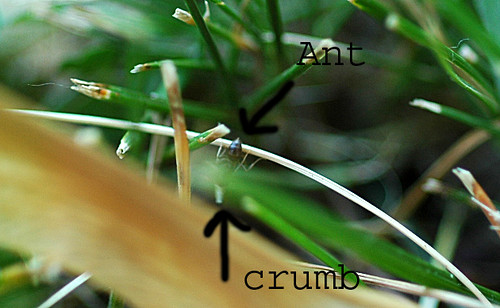