Last night I dabbed a little tea tree oil on a couple spots on my face. Tea tree oil is some serious Biscuit bait. I didn't let him near the actual spots but he was on my back and then on my head while I was on the floor. He was trying very hard to get at it. He's so weird.

Recovery still progressing. Today is day 8 and I'm glad we're through the first week. He's still trying to do more than he's supposed to but during the week it's easier because he has to be confined when we're gone.
When I'm home I start to feel really bad about it as he's in there mewing pitifully.

I went to pick up Mikale yesterday and realized that there was nowhere in the back for him to sit. Harry had taken the seats out of his van. So I just took him home and Mary met us there and she took him out to grandma's. I took Jack (canine version) out while I waited. He was pleased. I took some pictures of him.

I uploaded more pictures to my flickr. Go look! There are squirrels!

Radiator in the car has a hole in it. So that's going to have to be fixed and I think (hope) that will solve the problem. If it can't be fixed it will have to be replaced. More $$$. Ready to start going in the other direction.

plumerai that I've had sitting in my message inbox for more than a year. I never had what I thought was a good answer. 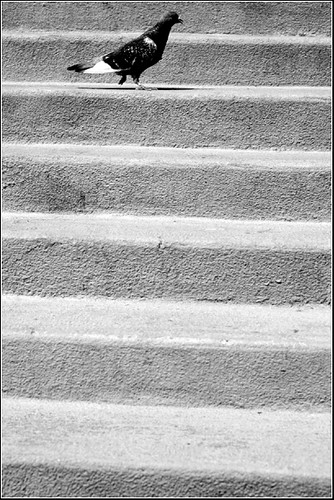 There are many more. Go look.