Kate (I don't remember her last name) called and apologized for not calling yesterday. She said she hoped she didn't cause too much worry for me. She also gave me her pager number so if I don't hear from her and I start to worry, I can page her and she'll call me back. So that's good. She's very nice. She said he's a good boy and that everyone has been saying "oh he's so cute!"

Biscuit's bloodwork is pretty normal and he'll be going in for surgery shortly. She said if everything goes well, she should be calling me around lunch time. Somewhere in the 11:30-12ish range I think.

So I'll be anxiously awaiting her call, pretty much stressing until then.

Ok! Most important stuff first: He's out of surgery and in recovery.

So, I took notes when she called. I'm glad I did. Lots of stuff. Looks like he has a pretty interesting birth defect. They found that while his right side is normal, he's missing muscle groups on his left side. It sounds like he's missing the muscles that would have made everything stay where it was supposed to. He's missing the muscles that attach the ribs to the body wall. His diaphram is ok but his ribs weren't attached to the abdomen. He's also missing the rectus abdominus on the left side. His organs are ok.

They took a different muscle group and moved it forward. So there is some tension on the incision and some concavity to his rib cage. But she said that should get better. They didn't have to use any mesh. They were able to close everything to itself. The way it's looking now, he should be able to go home tomorrow. But she'll be able to let me know for sure when she calls me tonight before she leaves for the day. I'll likely hear from her somewhere between 5:30 and 7. 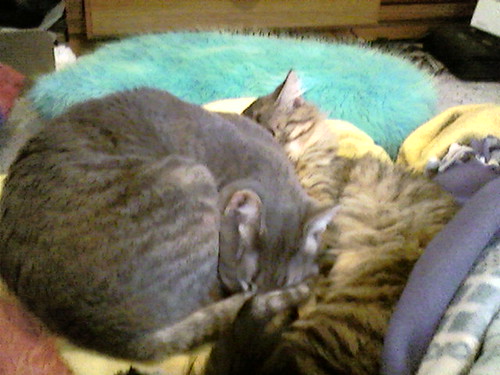 I talked to Kate just a while ago. I was in the car, not home yet so I'm going by memory and I know I missed a few things. But here is what I have.

Biscuit is fully recovered from anesthesia and walking around. His incision looks good. It's long and he has staples. He has some air in the hernia pocket and they put a compression jacket on him to try to help with that. Something about a little kitty compression jacket amuses me. Apparently Biscuit was not amused and not willing to wear the jacket. She said something about him throwing himself at the walls of his enclosure. So he is not wearing the jacket. She said she will try to feed him before she goes home for the night and that she did or would soon give him oral pain meds. She said he's doing great.

When he is home his incision will need to be kept clean, dry, unlicked and properly cared for. I hope they will have tips on how to keep it unlicked by him or the others.

As long as nothing comes up between now and then, he will be cleared for pick-up tomorrow morning. She will call me around 8 to solidify pick up time.
Collapse