Taking Biscuit to msu now. So far he is calm. This is scary for me. 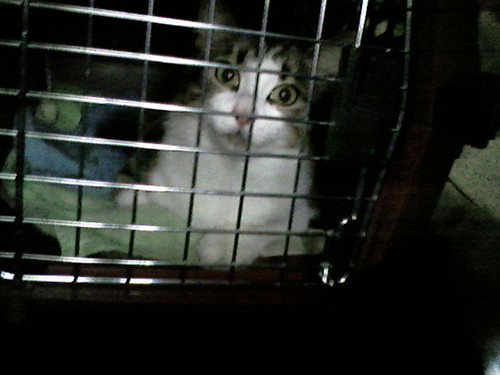 He has a hernia but they don't know how big. I have to leave him at MSU until wed or thurs. :( they will open him up and try to fix the hernia when they neuter.

My head hurts. Migraine-y so I feel nauseated. I would like to take drugs and lay down for a while.

We got there earlier than 10, probably closer to 9:30. We didn't wait long. I had a small form to fill out and then waited to see a student vet person to come.

The student was very nice. Her name was Kate something, I think. She was gentle with Biscuit and asked a lot of questions and he did not seem to mind her at all. She tried to take him to be weighted but there was a dog out there barking and Biscuit gave her a bit of a clawing, though I suspect he may have been trying to get up on her shoulder.

She brought him back and then left. She was to talk to one of the doctors and then come back with one to continue to go over stuff. She came back with two! One younger, French, I believe, and one older who kinda bothered me. I have their cards at home in my purse and I'll google them later. Older doctor came in, shook Steve's hand first, and kept addressing him rather than me. No matter that I'm on the forms, it's my cat and I'm the one paying the bills. But the other two weren't like that. It's not like I wanted them to completely shut Steve out, but to at least realize that he was there secondarily and observing what was going on and I was the one making the decisions and the one they really needed to talk to.

They all felt his belly and tried to find the outer edge of the hernia. They could feel one side but not all the way around. Which is scary since it seems that it's a bigger one. The smaller the better for that kind of thing I think. If it's small, they can just stitch it up and there is a low risk of infection, when it's really big there's a possibility that they'll need to move muscle around and use synthetic material to patch the hole and that makes more of a risk for infection. So that's worrisome. Today they will do blood work and x-rays and tomorrow surgery. They will do the neutering and then open him up to see what's going on in there. They probably won't know until then exactly what they're dealing with. I'll be able to pick him up Wednesday or maybe even Thursday. I don't like having him gone so long! And I'm going to be all worried about him.

They gave me an estimate on price and had me sign a consent form to have him treated and a form with the estimate written on it. He said it will be $1500 to $2000. Ouch. They had me pay the deposit before I left, half of the higher estimate. And I'll pay whatever the balance is when I pick him up. This week is going to give my credit card quite a workout.

I want my kitty home!
Collapse