I was definitely dreaming when my alarm went off. Blerg. Such an unpleasant way to wake up.

Speaking of unpleasant, let's move on to yesterday!

I was at work for 9 hours.
I picked up Mikale after that.
My car has had a bit of a lack of get up and go (for the last day or two) and my check engine light came on (yesterday while I was taking Mikale to g-ma's).
I waited for Steve to get out of work and come to g-ma's to follow me out to Barb and Harry's.
Harry told me bad things are probably wrong with my car and I should take it to a transmission place and get an estimate. This does not actually have anything to do with what I called him for, but rather the scary noise it makes. It makes it more when I drive over snow. He drove over snow so he heard it. The other thing is fixable and not as important at the moment.
I got home, past my bedtime, and ended up to bed later than I wanted to. I didn't even get a shower.
And my grandma is feeling sickly again. She better go to the Dr. today.

Today, I'll still be making up time but I'm not sure when I'll decide to leave. I think I might stay until 1. That would still leave me an hour and a half short but that's not too bad. Or I could leave at my normal time and be two hours short. Is it worth the money to not be there so long? I don't know yet. Guess I'll figure that out later.

Next week is going to be much like this one because I don't know how much time I'm going to end up taking off for Biscuit's stuff. Guess I find out more Monday when I take him.

It's really cold in here this morning. I hope that doesn't mean it's awful outside. It probably is though. It's still February in Michigan.

BBox Qu: Would you pay more for pizza?

One answer received: "God will provide."


... pizza? God will provide pizza? Um, what? Or God will provide the money so people can keep buying pizza... that's almost as silly as the people in high school my one year at Valley Lutheran praying for God to help them win their basketball games.

Here's what was up the other day.

Check out photo three in this slide show. It's so cute! And it amuses me.

When I saw this site before, I don't think it had any "english" translations. Go now, enjoy, read!

I've noticed on my particularly posty days, I'm almost guaranteed to get a salmon bot on aim. Have any of you gotten them? I put my chat logs for them on

buttercupsmiles but you'll have to scroll down a few entries.

Just curious about how common they are. If you have your aim sn in your profile, it will match up two random users who recently updated their journals. I think anyway. I know it happens usually just after I update.

In other news, today is going alright so far. I have made myself a to-do list and will shortly be accomplishing things on it. I will take my car to be looked at when I get out of here so maybe I'll leave at 12:30. Still not decided. As a result, I haven't filled out my time slip yet. It's a half hour. Hmmm... I think I'll go for 12:30. That leaves me a lot better off than I expected to be this week.

I took phone call today from a lady who wanted to give her feedback on the most recent changes. She asked me what had happened to the calendars of meetings and support groups and I told her that they still existed but now are only on the website instead of the print edition. She asked, "So what about those of us without computers?" and I suggested the library. "What do you mean 'the library'?"

I could not help myself. My response was "What do you mean 'what do I mean the library'? The *library*!"

I went to see Chuck. He said it's a 'slip in the transfer case' and something about a chain. And that he can fix it for $350. I don't have that handy but I must make it work. Harry said this is a good price and that I should do it. I can take it Thursday and have it back Friday. So I will try for that. 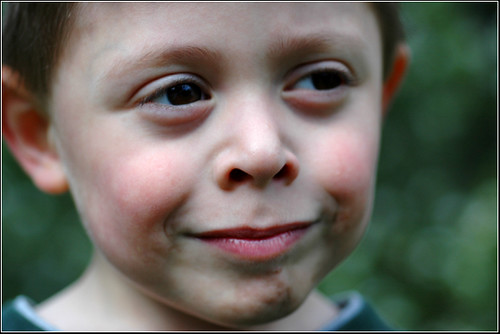 New old photo of Mikale. I don't know if I ever looked through this particular day. It looks like I didn't but I don't know why I wouldn't have. Anyway, I found it now. So yay!