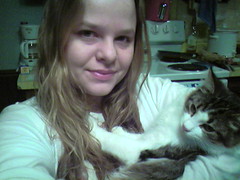 I am every bit as sleepy as I look!

I went to bed really early last night. It was fabulous. I actually got up a few minutes before my alarm went off. It's a much better way to start the day. Waking up to the alarm, usually mid-dream, is so jarring.

I was going to be picking up Mikale today but it's going to be tomorrow instead. My heel still hurts but I'll feel guilty if I don't give (canine) Jack any attention. He really likes walks.

I should think up something to have for dinner. I've been enjoying that cookbook so far. The corn slaw is good and the potato leek soup was very tasty. Maybe veggie burgers with more corn slaw or a whole wheat pasta salad. Hmm. I'll have to think on it.

I need to figure out a Thursday 13 for this week.
Collapse