So yesterday I apparently forgot to record the question for the ballot box. It doesn't happen often. It also doesn't make a difference in the voting. The question is in the paper. The system records the number of 1s (no votes) and 2s (yes votes) pressed. The comments are listened to out of a voice mail box the following day by me.

I don't think people realize a real person does all this. So almost everyone who called scolded me (well not *me* me, this place as a whole, as though it is the whole building that records this question instead of just me) for the question being the old one. Sorry people! I forgot! Just answer the damn question and move on.

So I think the voting probably ended up messed up only because people couldn't deal with it. Had they just rolled with it as though it were right everything would have been fine.

Also, my head still hurts. Wonder if it will stop within the next day or two. 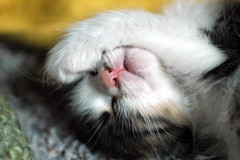 08/18/07 the little one sleeping
Originally uploaded by angelle321.

This is my current desktop at work. I only did the lightest working on these to get them desktop ready. I have many, many more I can do. Go behold some cuteness. There are more in my flickr account. 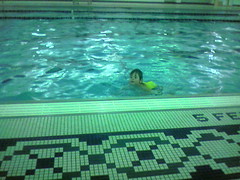