Yesterday I bought more formula for the mini kitties. While at the pet store, I tried to acquire small, short boxes (the kind canned cat food comes in) to use as mini kitty litter boxes. They're too small for a regular box. Had no luck there. That store rips off the front of the box when it's on the shelf. Easier for people to grab their cans, but a whole lot less useful to me.

So I tried my luck at evil Walmart. Hit the jackpot there. So I bought some regular kitty litter and snagged a bunch of boxes for them.

And yesterday they started using their new box! It was so exciting! The little one (whose parts are starting to look like boy parts) ate some kitten gooshy food. The big one continued to have formula. He doesn't seem to dig the solid stuff so far. I think I will try to entice him with some tuna mixed in to some kitty mush.

Today they are very, very playful. Scampering and rolling and wrestling. Awww!

Yay for (mostly) good for me food!

Hung out with Mike on one of his rare off Saturdays. Had Chinese food for dinner. Cleaned much of the kitchen. Visited the mini kitties.

I'm hot. I need to go wash my face. I feel greasy.

Today I should wash clothes. Lots of clothes. I should also work on more cleaning. 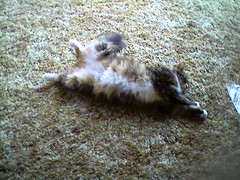 This morning for breakfast I had a super-mega-fiber tortilla with peanut butter, strawberry jam and sliced banana. Very yummy. I've also had butter crackers with hummus, sliced cucumber and peppered turkey. Also yummy. And I think I'll have some more turkey wrapped up with cucumber, tomato, lettuce and hummus in a bit. It's too hot to cook anything.
Collapse