so it has been working on the little one. She pooped Sunday, Monday and yesterday and I'm expecting something later today too. The big one still hasn't gone. He still doesn't seem uncomfortable so I don't know. I'm not sure if I should increase the fiber for him or the water or if I should just take him back in to the vet for an enema.

Other than the pooping thing, which has been a challenge all along, they're acting more like kittens and less like babies. Good, even if it's kind of sad. *sniff* they grow up so quickly! They're getting their teeth in and playing with each other. They move around more and are better at it. The other day the big one squatted and started peeing on the carpet. Also good in it's own way. It means I need to get them set up with a mini-kitty sized litter box and start letting them explore it and learn to use it.

I am so hot. The house is dreadfully warm. 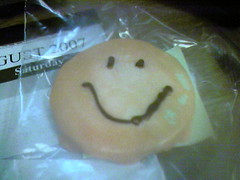 I feel like all I did was sleep yesterday. I'm still a little tired today but much better than I would be if I hadn't napped.

I feel fat. Some of this is just where I am in my cycle but it has also been my recent habits. I haven't had any time for anything resembling exercise and my eating habits have been a little less than awesome. Not bad, just not good. Last I checked I've remained steady with the weight I've lost but it won't stay that way if I don't start paying attention and moving around some. It's just usually when I have a free hour or two I want to sleep or check my e-mail or shower. Things that I haven't done as much of. And I definitely havent had the ambition to transform the tv room from mini kitty space to workout space and back again. Maybe I'll just have to ease back into walking. It's a time thing for the moment. I know things will return to normal. Just what's on my mind right now.

My class starts in a few weeks. Then it's back into photo mode. Maybe before then I'll rest up a bit. I've been too tired to be creative.

This is pretty exciting! They just chowed down on some mush made with ground up kitten kibble, formula and a little warm water. They dug right in. And then the big one pooped. A very, very small amount, but it was at least something.

I am pleased. But I didn't know they would take to it so well so they ate a little earlier than I would have had them eat. Now I don't know what time they'll be hungry again. Hopefully yummy kitty mush will tide them over for a while.
Collapse