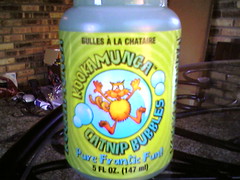 This could be entertaining

It seems that I'm always waiting for one or the other of the mini kitties to poop. This time it was the little one. It had been since Monday evening. But tonight - a real poop! It was messy and stinky and it made me very happy. It sounds so wrong but I so don't care. :P

I just got back from the pet supply store. I bought 4 more cans of formula. That should hold them for a bit. I also got a bottle of Kookamunga Catnip Bubbles. Sadly, the big kitties seemed more alarmed than amused. They're no fun. But now they're laying on the floor where the bubbles fell. Maybe I'll try again later.

Yesterday I was walking with Mike and the dog and we met a cat near Arthur Hill. I usually stop to visit with cats when we see them. He was very friendly, all white with long hair. But it was sad. He was all dirty and matted and had twigs and junk stuck in his fur. And he was thin. I gave him a good petting and then we were going to be on our way when all of a sudden he let out a yell and growl and started making chewing motions. So I went back over to him and checked him over again. I checked for swelling on his head and on the jawline but there was nothing. But when I opened his mouth I just barely brushed against his teeth and he let out a yowl and ran from me. Poor kitty! I had had to wait until we got back to call my grandma and see what she thought and if she would be willing to hold him for a couple days if I caught him so I could take him to the vet. He's friendly, if I could get an adoption place to take him he'd make someone a nice kitty. It got too late (and dark) to go back last night and today when we went we didn't see any trace of him. We'll go back tomorrow and keep looking. He might be someone's "pet" but if he is, they don't deserve to have him. He is not well kept.
Collapse