remorra picked us up and we went for yummy pizza. We got to meet her girlie and her puppy, the fabulous and adorable Judy. We went to this place that had assorted drinks and baked goods. They weren't bad but not worth a special trip there in the future. We say outside and talked and I tried to lure birds over so I could take pictures of them. That was a success. I used my not so fabulous baked goods. I came very close to getting one to eat out of my hand. It was just a little too scared though. But I could tell he (or maybe it was a she) wanted to. It was awesome to see

remorra again and I look forward to seeing her today. Right now I need to finish getting ready or I will make us late. 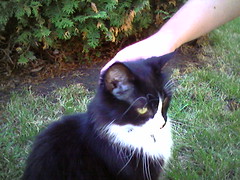 A neighborhood kitty named Fluffy. He's not ours. 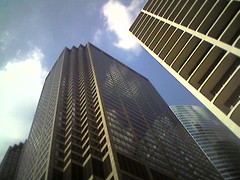 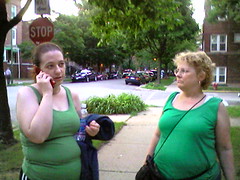 Steve's mom and his sister, Beth.

Ok, let's see. We met busties for breakfast. We had turbojenn and her guy, pollystyrene and her guy, remorra, sidecar and stargazer. The food was yummy (I had a half-order of dulce banana rumba french toast(thick brioche french toast layered with warm bananas, rum and golden raisins, striped with a crème caramel sauce & toasted pecans) and a half-order of blackberry bliss cakes (fluffy hotcakes layered with warm blackberries and vanilla mascarpone cream, then topped w/a brown sugar & oat crust) but we were at a long table so it was hard to hear people at the other end. After that we lost jenn and polly. I tagged along with remorra, sidecar and stargazer to the thrift shop. I felt very awkward about it though and I didn't know where they went for a bit and I didn't want to just follow them around and be like please talk to me. So I uh, stood there. Awkwardly. I kinda wanted to just go home at that point. It got better later though after I found them again. Then Steve found us again after taking the car back to the apartment and walking down. He joined me, remorra and stargazer for the bookstore and then ice cream. That was all good and I felt much better by the end. I am so not good at social stuff sometimes. I just don't know what to say to people and I never know how much I should push or if I'm just making people talk to me. But enough about that. All in all it was good and successful and I'm glad I went even if it was very scary. I wish I would have remembered to take pictures of my breakfast before I started inhaling it. It was so tasty though.

On our way to breakfast we met a kitty named "Fluffy" outside the apartment. That picture was of him. He's not ours, just a neighborhood kitty. He was very friendly.

When we got back to the apartment, I was putting on some Gluttony and I forgot I was holding it open in my hand and managed to splash most of the imp on my arm and shirt. I am fragrant. We were just about to leave though so I just went with it. I washed it out with some shampoo when we got back. We went to Navy Pier, wandered for a bit, listened to some music, and had dinner and drinks. Steve and I have thought about going for twinkies at Hamburger Mary's but I feel a little bleah still from dinner.
Collapse