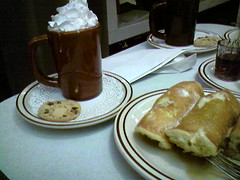 Hot chocolate and pigs in a blanket. Yum!

I haven't had much chance to write since I got here. So. I'll try to do an update of sorts and try not to leave things out. I'll make a separate post for the shopping. It will be filtered.

Sunday: We finished up our getting ready to go and I left first in my car to g-ma's to visit and tend to Gracie. When Steve arrived we left, making our traditional stop at Taco Bell before getting on the highway. The drive was long but we listened to music and it wasn't too bad. Usually I end up more restless. I took a mini-nap and I think that helped. When we arrived here, we brought our stuff upstairs and then the pizza arrived so we had tasty food and hung out until bed time.

Monday: Up early and took Beth to a Dr.'s appointment. We were there until lunch time and we met up with Steve's mom, who works at the hospital, and went to lunch. I had a turkey croissant sandwich. It had turkey (of course), bacon, avocado, lettuce and tomato and came with fries and a side of coleslaw.

For the afternoon/evening, we decided to tackle some of the planned shopping. We went to Ethel's and sickened ourselves on chocolatey goodness. I had what was in my earlier posted photo; a caramel pecan brownie and an iced mocha. Steve had their Mudslide which is their drinking chocolate ( not cut with any milk, which I believe is like what I've always heard french drinking chocolate described as... pretty much like drinking fondue) with two shots of espresso mixed in. I went to Sephora, the Sanrio store, Lush and an H&M. We got back fairly late and had some leftover pizza and then went to bed.

Tuesday:  We watched most of a movie on tv with Beth before I greeted the day. We did part one of the Taste. We decided to split it up into two visits to avoid sickening ourselves. Too much tasty food to do all at once. Our method of doing things is to get the taste portion and then split it between the two of us. This allows us to sample many things. Yay!

We hit up the Old Navy and H&M after that. They didn't have my white tank tops. Not in my size anyway. They had a whole stack of them in Small. Ha! We met up with Steve's mom, Beth, and a nun for dinner. She was nice but a little too familiar-chatty for me. Beth was in quite a bit of pain so she decided to go home instead of going to the fireworks. That would have left Steve and me with the chatty lady. For hours. So we decided to stay with Beth.

Beth ended up going to the emergency room anyway and we followed shortly after. We watched the big fireworks show from the roof of the hospital parking structure. It was weird because we couldn't hear them. It was like seeing fireworks with the mute button on. They were partially blocked by buildings. It was interesting though. I can say I hadn't watched them that way before. When they were done, we made our way to the waiting room in the emergency department. That almost is worth a whole journal entry all on its own. I have probably forgotten much of it by now.

We were with other people in the waiting room and there were a few conversations going on. The girl directly across from me was there for something. She was in pain but I don't know much more than that. I do know that she is not pregnant, has a daughter who will turn 3 at the end of this year, described her pain as an "8" when she registered and did not get called back the whole time we were there.

The girl to her left is a couple months pregnant, has two boys and a girl, wanted her first two kids but wasn't so thrilled about the third. Her current baby-daddy is in jail. He had previous arrests. His current lock-up is for stealing a lawnmower in Indiana. Her sister (who was not present) is 32, does crack and has six living children. She has also lost a few pregnancies, including one in which she was 4 months along and the baby just dropped right out. She "felt something wriggling in her pants" and reached down and had a baby in her hands. It died when the cord was cut.

The lady to my right was older and was there because her daughter-in-law was having pregnancy complications. It was possible that she might have the baby by c-section that night. Her son called her back while we were sitting there so I don't know what happened.

To her right was a couple. The guy did all the talking. The girl is pregnant and was there because she was sick. She mostly just had her head on his shoulder the whole time. They have one child and had twins (boys) who died in February. One was stillborn and the other died within hours of birth. She is now probably a couple months pregnant. The guy had been sick and now he was feeling better. The girl went to the same high school as the girl who was sitting in front of me. The girl across from me graduated in '99.

We left the emergency department eventually and walked Steve's mom back to her car and she drove us to ours and took our spot. It was a little more convenient and a little less remote. She was going to stay with Beth. We went out for pancakes and sausage ( in pigs-in-a-blanket form) and hot chocolate before heading home to bed. A little after we got back, Steve's mom called to say that Beth was being released and that they hadn't found anything yet but that she had gotten drugs for the pain.

This brings me to today. It's rather gray outside. I don't know what we're doing. I need to take a shower and we're going to the grocery store. Then, who knows? Also, I'm going to be taking more food pictures and I think I will do a later food picture post all at once. The shopping post will follow this one. 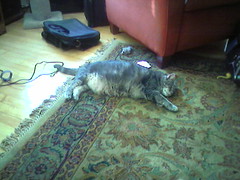 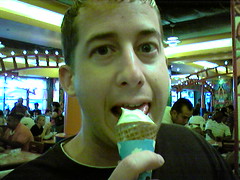 Steve eating ice cream. We are at Navy Pier. 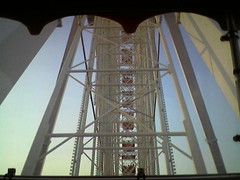 On the Ferris wheel at navy pier 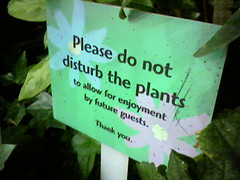 Do not disturb
Originally uploaded by angelle321.