I have Hello Kitty Meow-Berry pop tarts today. It doesn't feel like it ought
to be Wednesday already. It was less cold today but it really didn't feel
better. It took a while before my windshield would defrost.
.
Yesterday I developed two rolls of film. I really need to get the stuff to
start doing that at home. I'm so slow. I would feel better about it if I
were at home and could take my time. So I did the one roll, set it to dry
and then did the other. I had company for the second roll. A dude in the
class who had been off with some sort of plague had a roll to do too. It was
his first time developing so I felt a little better about being slow.
.
I am unenthused with these rolls as well. I think I've been feeling
discouraged. I would like to get one or two decent roll shot. That would
make me feel better and possibly get me going back on the right track.
.
Later I'll maybe do some scanning. 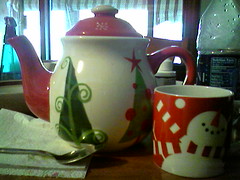 I am having tea.