Today feels better than yesterday. More sleep is what did it I think. I went
to bed at 8:30 last night. I could have (and possibly should have) shot for
8 but ah well. I took a shower and washed my hair earlier in the day so I
would have it done and not have to worry about it after Mikale's show. I was
very Lushy! Let's see. I put on Mask of Magnaminty before my shower, I
washed my hair with I Love Juicy, conditioned with Coolaulin, washed me with
Sonic Death Monkey, used 17 Cherry Tree Lane on my back with my back brush,
Extra Virgin Olive soap on my feet with my foot scrubby brush, got out and
used Imperialis to moisturize my face, Christmas massage bar to moisturize
the rest of me, Aromacreme on my armpits, one of the lip balms on my lips,
and finished with Lemony Flutter on my hands. That's a bunch of Lush!
.
The kindergarteners were so cute and amusing. They were all dressed as
dinosaurs and they had dinosaur songs. Mikale also had a speaking part. I
wish I could have gotten better pictures. I did the best I could for where I
was though. He was a Velocaraptor. That alone is amusing enough. He had a
plump tail. I like their little voices and the way they pronounce things.
.
Today's BPAL: Sugar Cookie '05 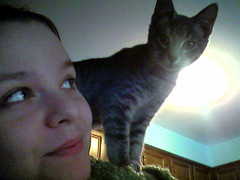 Me with the baby cat.