Two things you should be watching/buying if you are not already:

Weeds on Showtime. Season one is out on DVD and I think they're into Season 2 now.

Deadwood on HBO. Seasons one and two are out on DVD and I think they're into the third and final season now.

I say I think on both of those because I don't actually have cable. So don't let that be an excuse. Get you to amazon or the video store and check them out. Good stuff. I swear. 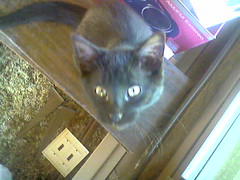