I haven't been writing enough at all. I might have to go back through the pictures I've taken and write more complete entries. So yesterday we went back to the Taste to use up the rest of our tickets. We had pizza and fruity ice. We went down to Navy Pier and got lemonade before watching Superman. I admit it was kind of cool. It was on imax and so it was huge and parts of it were in 3D. I dropped my first pair of classes and Steve was cool and gave me his and then went and got some more. So all was well.

Before the movie we stopped to listen to those boya singing. I wanted to stay and check out more of that but the timing just didn't work out. Sad really cause they were pretty fabulous. I like pretty harmony. I took a couple videos with the little camera and I have no idea if the sound will turn out on them. It was kind of windy.

We walked around after the movie looking at things and people watching. I took a few pictures. Not many though. I haven't taken many at all since we've been here. Odd for me.

We had mexican food for dinner and had to wait for a long long time to get seated. There was this family behind us that was so obnoxious. I was so so so glad to not be on vacation with them. Or a part of their family. The teenage girl was all whiny and saying she wouldnt eat if they couldn't sit outside. She wanted the ambiance of sitting outside cause like if you sat inside it would be like eating in a mall! whine whine whine. She was just a brat. She wandered away for a while cause it was boring. The teenage son was pestering the mom figure. Only he called her Kathleen so I dont know if it was his mom or another relative. But it was all a very mom-dad-brother-sister kind of vibe so maybe that's just what he called her. And he kept making her repeat things and asking her dumb questions. They spent 10 minutes just discussing the name of the restaurant. I wanted to kick him. And then they were talking about not having their fish fed cause they didn't want so and so in the house. So I think maybe they just decided to starve their fish while they went on vacation.

I was glad that they were seated nowhere near us. So we were able to enjoy our tasty food in peace. And it was tasty food. They were too quick getting it out so we didn't get to time it to watch the fireworks from there. We actually didn't stay and watch them at all. We left after getting ice cream from Ben & Jerry's. It was getting chilly and it was really crowded and we were tired.

Today I have a bit of a sunburn.

Today we are going to the Science and Industry museum. That's the one we seem to go to the most. They seem to get a lot of cool stuff. I wanted to see the frog exhibit. So I will. Yay for frogs. 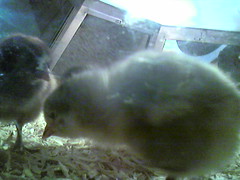 Look how cute they are! I told it "I don't want to eat you!" 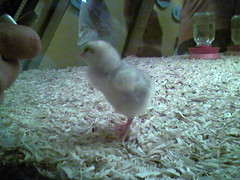 I want one. Except i know i really don't.

The singing boys from last night. My video did turn out. Yay!